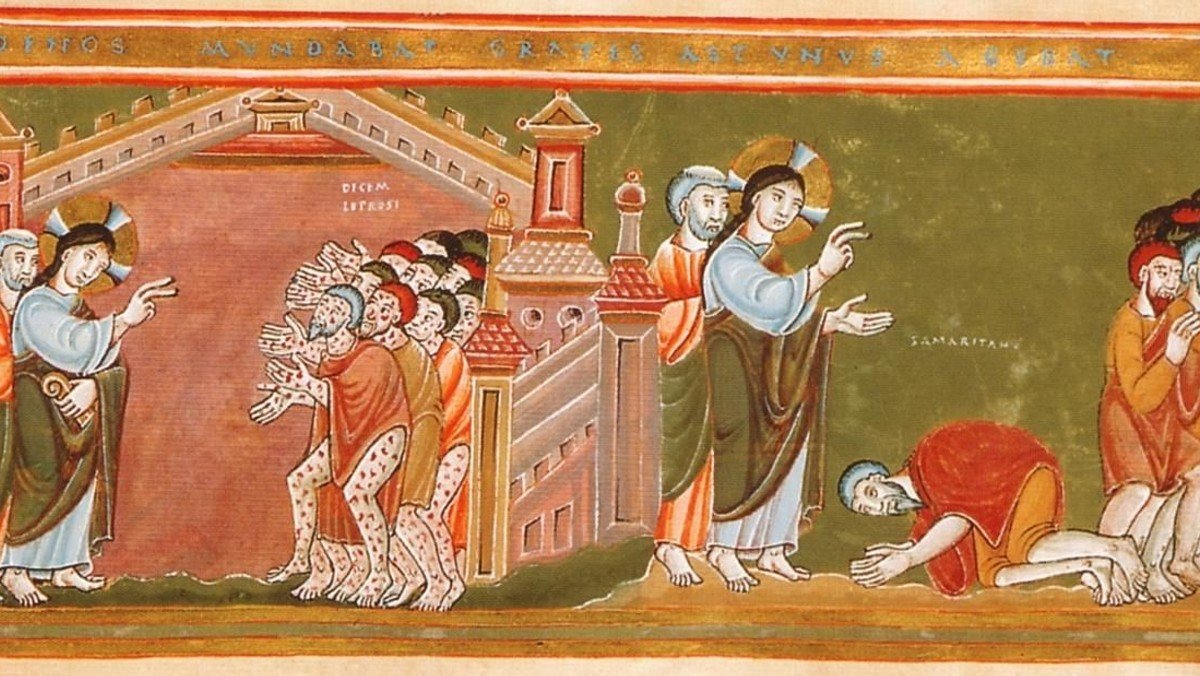 I was in El Salvador in 2008, and when I returned home I brought back a case of C. dificile. You may never have heard of it, but it’s contagious, and it leads to tens of thousands of deaths each year in the United States alone. I didn’t know this at the time. And when I went to the emergency room with extreme abdominal pain, they didn’t yet know that I was a danger to everyone around me. But they treated it quickly and appropriately, and hopefully I didn’t infect anyone else. I’ll never know.

After I got home from the hospital I was required to call the Centers for Disease Control and report my condition to them. Frankly, this felt humiliating—as if it had been my fault that the ice cubes in that restaurant had been tainted! I was young, and I was thankful for a speedy recovery. But if you’ve ever carried around a medical condition, especially a contagious one, you may for a time have felt cast out, unable to participate in society in a meaningful way.

In the Bible, the catch-all term “leprosy” can refer to psoriasis, eczema, athlete’s foot, or any other minor skin disease, all the way up to and including actual leprosy, which we call Hansen’s disease today and know how to treat. So when we hear that there were ten lepers, we don’t know how contagious they really were. But we do know what instruction they received from Mosaic law. This is from the Book of Leviticus:

The person who has the leprous disease shall wear torn clothes and let the hair of his head be dishevelled; and he shall cover his upper lip and cry out, ‘Unclean, unclean.’ He shall remain unclean as long as he has the disease; he is unclean. He shall live alone; his dwelling shall be outside the camp. [1]

Now, the priests were the keepers of cleanness. They were the ancient Jewish Centers for Disease Control. If a person did recover from a leprous disease, the priests were the ones to certify that recovery, and only then could a leper be restored to the community. It was a system intended not to victimize, but simply to prevent the spread of disease many centuries before the advent of modern medical science.

I want to suggest that in our gospel reading today, the miracle is not that Jesus cured ten lepers. By the seventeenth chapter of Luke, Jesus has performed so many miraculous cures that we shouldn’t be surprised by another one. So why is this one recorded? Well, it has a twist. One of the ten lepers is a Samaritan.

The Samaritans were the descendants of the northern kingdom of Israel, which had been conquered by and intermarried with the Assyrians centuries before. While the Samaritans held to the Law of Moses, they did not share a dedication to the temple in Jerusalem as the center of worship. They couldn’t, because Jerusalem was not part of their territory. And they did not share the corporate memory of the Babylonian exile because they hadn’t gone through it. The Jews of Jesus’ time considered the Samaritans to be backward, theologically ignorant, and not to be associated with.

So we have ten lepers, and since one of them is a Samaritan, presumably the other nine are Jews. They have been fending for themselves in the region between Samaria and Galilee, outcasts from their respective communities. Misfortune has brought them together. And now, when they meet Jesus, desperation gives them common cause. Recognizing a man with a reputation for acting outside the social norms, together they seek help from him.

“Go and show yourselves to the priests,” Jesus says. But no healing is evident until all ten are down the road. Then comes the moment of realization: the disease is gone! Nine lepers continue on their way, following Jesus’ instructions to go to the priests.

And then there’s the Samaritan. When the Samaritan leper is healed, he has cause to rejoice. He is free from his disease! But is he going to show himself to the priests? Not the ones in Galilee. I don’t know what the Samaritan system was for declaring cleanness, but the point is that he cannot go with the other nine. He is no longer one of them. The moment of their healing is the moment when the company must part ways.

At this point, the focus of the story shifts. The miracle is not that ten were cured of leprosy. The miracle is that one was not only cured, but also healed through his thankfulness. The miracle folds the thankful one into a much larger community.

Jesus announces that only the foreigner, the Samaritan, has returned “to give praise to God.” Does he mean that the other nine are not thankful? Does he mean that showing themselves to the priests demonstrates their lack of thankfulness? Of course not. No doubt the other nine are extremely thankful, and they’ll be praising God when they make the appropriate thank-offerings according to Mosaic law. Jesus has no quibble with the Bible or with the temple system. But he also calls us beyond them to look carefully at our actual human relationships.

Jesus wants everyone to see the problem here: that the community formed among these ten desperate lepers has been broken … by religion. The ways of the priests are right and proper, but when they get in the way of human community, they become problematic. Thankfulness requires no priest. Praise to God requires no Jerusalem. Whether one is cured of disease or not, true healing comes through trust in God. And the Samaritan realizes that his quickest path to expressing his trust lies not on the long road back to Samaria, but by retracing just a few steps and falling down at Jesus’ feet.

“Get up and go on your way,” Jesus says. “Your faith has made you well.” He doesn’t say, “My power has cured you,” though that is clearly the case. He goes beyond. Jesus sets aside the cultural exclusion of the foreigner and accepts both Samaritans and Jews into a much larger community.

This leads naturally to a conversation about privilege. That word comes up a lot in our present-day discourse. We hear about “white privilege,” a term that some people are still uncomfortable with because it makes them feel vaguely guilty and helpless. But privilege is not a term of judgment. It’s just an observation—a descriptor. It means that society grants more unearned power, more unearned benefit of the doubt, to some people than to others. And it means that whatever kind of unearned privilege we find ourselves with, we might be enjoying its benefits without thinking about or even noticing them. Recognition of one’s privilege is not a source of shame but of empowerment, because then we can decide how to use it wisely.

The nine lepers have “Jewish privilege.” Yes, they are members of an occupied and oppressed people. They don’t have the same privilege that Greeks and Romans do. But no matter what, in Galilee they are higher on social ladder than this Samaritan. Jesus doesn’t condemn the fact of that privilege. He merely points it out. And then he tells the one without that privilege, “Your faith has made you well.”

Jesus has come to gather the ones without privilege. In him, all who are cast out and despised can find a home. When the established order excludes them, Jesus gives them a place to belong. And that belonging—born not of race or gender or religion or social status, but of having been welcomed and healed—makes this Samaritan extremely thankful.

In our world today, it works the same way. Jesus comes for all of us, yes, but the more privilege we have, the harder it may be for us to appreciate that. It may also be harder for us to show thanks. The more we think we can handle our own lives, all on our own, the fewer people we’ll think we rely on. The extreme privilege of wealth and power can even cut us off from our community, though nobody has questioned our belonging. Extreme privilege can make us isolated and lonely. And when real problems do come along, our privilege can exacerbate this isolation.

Meanwhile, those without privilege are often better at building community. Those who have nothing left to lose will make the time to build relationships, because you never know whose help you’ll need and when. Ten lepers find common cause in an illness that transcends their religious differences. It also happens in our own time. I have one more story for you.

Several years ago in Bellingham, somebody broke into one of the buildings belonging to St. Paul’s Episcopal Church—the building where, every Tuesday, we served a meal to dozens of people down on their luck. The thief stripped out a bunch of copper wire to sell. We had to close the building for a week until the damage could be repaired, to the tune of $1,000. This number became widely known, as the local TV news ran a story on the break-in and interviewed the rector.

About a week later, a check showed up at the church office. It was from an anonymous source, but a brief note told us it was a collection taken up among the homeless population of Bellingham in deepest gratitude for the use of our space on Tuesday mornings. The check was for $1,000.

In a separate incident, a veteran who had formerly been homeless also came by the office with a check for $1,000. He encouraged us to keep doing what we were doing.

Gratitude and faith go hand in hand. Those who cannot count on their own efforts learn to rely on others to help them. When the opportunity comes to give back, that can happen too, with amazing results. And giving thanks, whether through money or simply through a kind word, isn’t just a polite thing to do. It actually strengthens the relationship.

As we gather here today to meet Jesus at this table, I invite you to take a moment to notice who isn’t here. This community extends far beyond Sunday morning worship. Who are the people in your life who might be afraid to join us for this feast, for fear of being told they don’t actually belong? Who are the people who literally can’t get here on a Sunday morning, through illness or work schedule or lack of transportation, but who are longing for community? What can you do this week to include them? There are no outcasts here—there are only those who are still learning how to give up our privilege and follow in Jesus’ footsteps. And that includes every one of us. Amen.