The mission of the Episcopal Church of the Good Shepherd is to know Christ and to make Christ's love known to others.

Christians are believers in God—one God, supremely good, who created all that exists, including us, and who cares for all creation unfailingly. What makes Christians unique is that we identify this one God with a human person who lived and died: Jesus of Nazareth, a first-century Palestinian Jew. Jesus healed sick people, gathered a circle of his followers (Jewish like him) and taught people how best to love God and other people. Jesus was brought up on charges of political subversion and executed by the Roman authorities who occupied his homeland.

If this were all there was to it, Jesus might be an interesting historical figure and not much more. But Christians also believe that three days after his death, Jesus rose from the dead and appeared again to his closest followers. For these followers, Jesus’s resurrection confirmed not only that Jesus’s message and teachings were true, but also that Jesus was God’s own chosen, or “anointed.” In Greek, the language of the Christian scriptures, the word for “anointed” was christos… and so Jesus came to be called Christ. Eventually, Jesus was recognized not just as God’s messenger, but as God in human form—both human and divine. This is the heart of Christian teaching about Jesus: that God, the all-powerful creator of the universe, loved human beings so much that God became one of us.

Whole libraries have been filled with books about Jesus and about Christianity. But the most basic thing to know is this: Jesus, who was at once both God and a human being, taught a way of love, and he died and rose again “for us and for our salvation”—in the words of the Nicene Creed, one of the oldest expressions of Christian faith. What exactly is meant by Jesus saving us is a complex subject, and Christians down the centuries have proposed many different answers. But they share the common conviction that Jesus, by his life and death, opened up the possibility of a new way of life for all people. 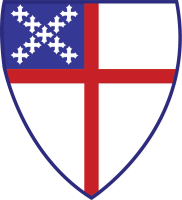 Episcopalians are, first and foremost, Christians: followers of Jesus Christ, just like Roman Catholics, Baptists, Orthodox Christians, Methodists, Pentecostals, and thousands of other denominations the world over. But what makes us distinctive? For one thing, we value togetherness in worship more than agreement about doctrine. We worship with our whole bodies as we stand, kneel, sing, and pray. And the ways we worship teach us and remind us what we believe.

The Episcopal Church is an American-leaning expression of a form of Christianity that came to exist in England in the 1500s, now known worldwide as Anglicanism. At the time when many in Europe were deciding to break away from the Roman Catholic Church, we did too, but for different reasons. We decided that instead of all believing precisely the same things, we would pray the same way and trust God to help us stay unified in our differences.

You might say that Episcopalians bridge the Catholic and Protestant traditions, walking a middle way. This puts us at a unique crossroads: Episcopalians have the ability to hear, understand, and work with many different kinds of Christians. 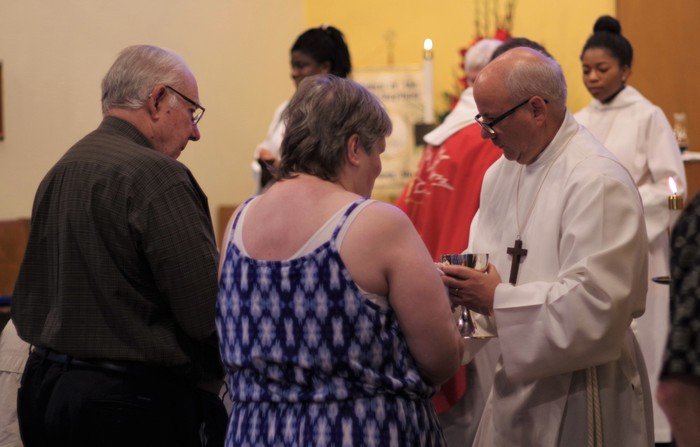 Both Ancient and Modern

At Good Shepherd, our weekly worship service reflects this reality. One moment we'll sing a centuries-old hymn, and the next moment we'll sing a contemporary setting of the Lord's Prayer. We have candles and stained glass, but we also have a big projector screen that aids our hybrid worship. We use The Book of Common Prayer, the standard Episcopal book of worship whose first edition is nearly 500 years old. But we also use recent or newly composed prayers that we find relevant to our times. The ancient and the modern join together when we come before God.

Our sermons are brief, because we also have other things to do with that time: saying prayers, singing songs, and taking part in Holy Communion (also known as the Lord's Supper), which we celebrate together every week. All of these make up a standard weekly service called Holy Eucharist. Here is an annotated video primer on Episcopal worship. 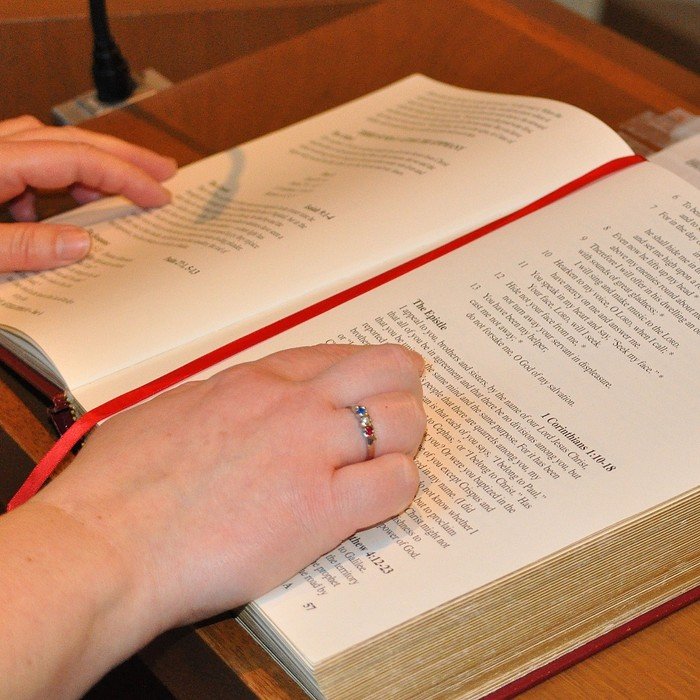 Some people ask whether the Episcopal Church is a "Bible-based" church. Simply put, yes!  Spend an hour in Episcopal worship and you'll hear more from the Bible than you will in most other churches. At a typical service of Holy Eucharist, you’ll hear four different Bible readings prior to the sermon.

While most people understand the Bible to be a single book, it is actually a collection of writings authored by many human beings, almost all of whom were Jewish, over the course of more than a millennium. The Bible is complex and mysterious, and it will never stop giving us gifts of helpful insight. The Bible is intended to begin conversation—never to end it.

The Bible (or “Holy Scripture,” as we also refer to it) is one of the main places we expect to meet God, but not the only one. While Scripture is always in the mix, church tradition over the centuries also plays a role. And we trust our own God-given reason and experience to guide us as well. (God doesn't give us brains so as not to use them!) This triple understanding of authority—Scripture, Tradition, and Reason—is a well-known image in the Anglican tradition, often called "the three-legged stool." 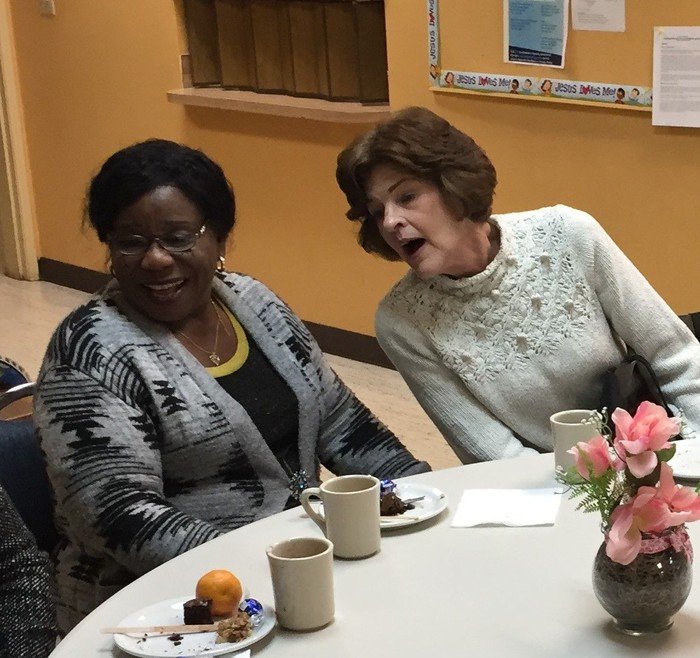 Episcopalians are renowned for seeing both sides of things: discussing our differences can strengthen and sharpen our faith. But that doesn't mean that we ignore or paper over our differences, especially when it comes to issues of human dignity. Justice and compassion are of deep concern to Episcopalians, not as partisan political issues, but as the backbone of everyday Christian practice.

We believe that God calls all sorts of people to leadership in the church. The Episcopal Church has ordained women as clergy since the 1970s and has supported same-sex marriage officially since 2015.  You'll find women and LGBTQ people at all levels of church leadership. As well, we are coming to terms with the reality of structural racism and white privilege both in the church and in our whole society.

Does this mean that we throw away centuries of tradition simply to capitulate to the dominant culture? Nothing could be further from the truth. Our focus on human dignity comes directly from our understanding of Jesus Christ as the divine human being (not just the divine man). By being born among us, God has confirmed the holiness of our humanity. As we read in the Revelation to John, "See! The home of God is among mortals" (Revelation 21:3). God meets us where we are and invites us to live in love with one another. Being a woman or being LGBTQ does not restrict us at all in this call. 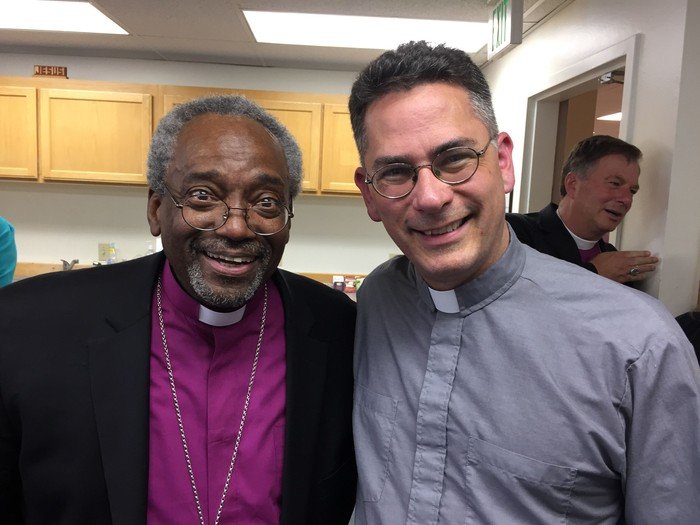 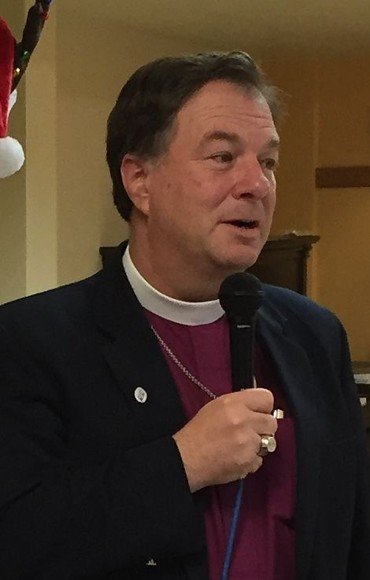 The Diocese of Olympia

The Episcopal Church is organized into regional groups called dioceses, each of which is headed by a bishop. The Diocese of Olympia covers all of Western Washington; our bishop is the Rt. Rev. Greg Rickel.

We are a democratic church: both ordinary churchgoers and clergy of all kinds gather every three years at our General Convention to make decisions that affect the whole Episcopal Church. The highest-ranking leader in the Episcopal Church is our presiding bishop, the Most Rev. Michael Curry. You may have heard him preach at a royal wedding!